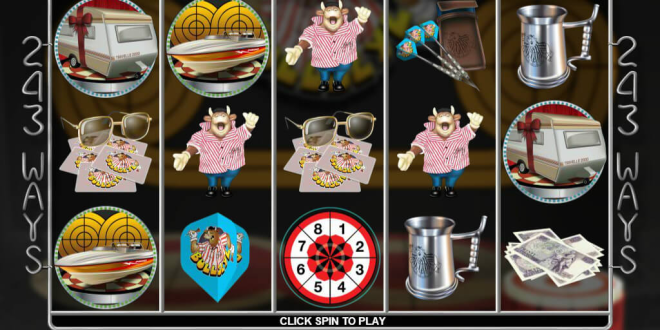 Bullseye was seminal 80’s viewing for many darts and quiz lovers. Jim Bowen was the host, with Tony Green the scorer and they were joined by a cartoon bull by the imaginative name of Bully as they oversaw three teams of contestants seeking to win a host of ‘top’ prizes.

Back in the 80s, this was compulsive viewing and 30 years later, Microgaming have released a slot which perfectly captures the elements that made Bullseye such a national institution.
The new slot is a 5×3 reel slot that boasts 243-ways to win rather than conventional paylines and the game is packed full with features which will have memories of the gameshow (if you came across it) flooding back.

The symbols on the reel include many of the top prizes from the game (caravan’s speedboats and holidays) as well as bully himself, a set of darts, Jim Bowen’s classes and question cards, a tankard, a darts flight and a nice wodge of cash.

The in game wild is the Bullseye logo which substitutes for most of the symbols on the reels to help create a winning payline.

The dart board Scatter symbol gives you access to the free spins round when you land three or more across the reels. Here you trigger 15-free spins, all of which can be retriggered from within the round. All wins in free spins are doubled and additional scatters landing during free spins offer a multiplier of between 5x and 100x the amount won.

You can even retrigger Bully’s Prize Board bonus round from within free spins too.

With a maximum bet of just 15.00, this is a game affordable for all and with up to 121,000 available to be won, this is one Bullseye Star Prize you will not mind taking home!