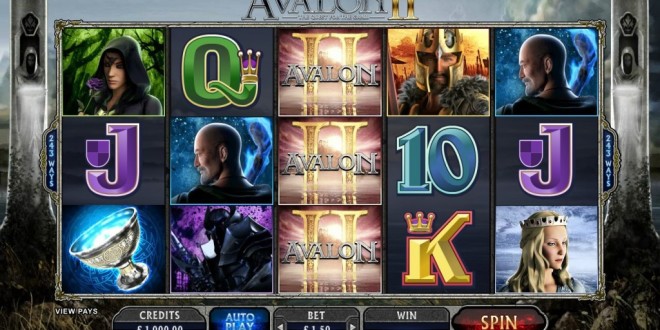 This February, Avalon II, the sequel to the hugely popular Avalon video slot, hits casinos and offers fans of the original a new instalment of this medieval-inspired epic. Furthermore, there’s a whole host of improvements and a brand new adventure to follow!

This time you will join King Arthur and his Knights of the Round Table as they go on their most famous quest; the search for the holiest of relics, the Holy Grail.

Along the way you will encounter a total of eight fantastic bonus games, which will not only serve as the waypoints for your quest, but will give players of the game a fantastic opportunity to bolster their funds with a number of cash prizes, multipliers and free spin bonuses.

As you move along the quest, you uncover more of the story. In the base game, the wizard Merlin puts in random appearances, bequeathing you cash with a flick of his magic wand, or turning a win into a bigger win via a random multiplier.

Land the scatter symbols on the required reels and you’ll trigger the bonus game section, with eight to complete in order to complete the quest.

Each bonus game is inspired by a famous aspect of the Holy Grail legend, from locating the lost sword Excalibur from the Lake of Legends, through to the final showdown battle with the spectral Black Knight, the guardian of the grail.

Defeat the knight and not only is the grail yours, but you also get to have a spin of the Wheels of Avalon, which will unlock your final, big cash prize, which could be worth up and including the huge jackpot of 2,400,000 coins.

With fabulous sound effects, immersive gameplay and a genuine quest feel throughout the slot, Avalon II should be every bit as popular as its predecessor with all types of slot fans.

microgaming online slots slot 2014-02-01
admin
Share !
Previous: Does a free casino no deposit required exist?
Next: What are the advantages of playing in a PayPal Casino?